To begin with, I have been using IPS monitors for nine years. About Iiyama, I always thought it was a brand of expensive luxury monitors for professional use (artists, photographers, designers, etc.). In my opinion, this was the case before – they did not have monitors cheaper than 250 US dollars. But, apparently, they have recently re-branded and decided to enter the wide market. So in choosing this monitor, I intuitively counted on a product with quality standards higher than competitive brands in the same price range. The calculation was justified by 100%.

Please note that Iiyama has two similar models, this one is GB2470HSU-B1 and G2470HSU-B1. The only difference is the presence of a height-adjustable stand for this model. And since my last Dell passed away because he was standing on a box that stood on a table into which I crashed into and from which the monitor fell with its muzzle on the mouse – it was very important for me to buy a monitor with height adjustment. A small overpayment was absolutely justified for me, but if you are going to hang the monitor on a bracket and are not going to use a stand, there is no point in the GB model for you. Standard VESA 100 x 100 on both models.

The box is healthy (HxWxD = 41x69x20 cm), but it does not have a handle on top, which is sad. Made from scotch tape by store employees. By the way, without any problems they also allowed me to carry out an express check for dead pixels with TFTTEST from my laptop, for which the online trade has a separate respect. Customer focus is always at its best in the four checkout points that I have been to many times (which thus becomes a rule, not a coincidence).

When opening the box, we are greeted by the same size foam block of two thick parts. I think you can safely throw this box into the back of a rally truck, win the Paris-Dakar, and nothing will happen to the monitor.

Package includes HDMI cable, DisplayPort cable, USB cable, and power cable. The monitor has a built-in power supply. Everything, of course, was packaged in bags, which in the photo are just a bunch of glare, so I took it out.

The monitor is assembled in ten seconds. The scheme is standard – the tripod is screwed to the main leg. No tools are needed.

Well, first impressions? Well, remember how you got an A on your hardest test in school. This is the moment when they found out their assessment. There is something similar here. The pleasure that the time and effort you spent on choices, money, hopes – everything came true. The case when a good thing is immediately visible. Heavy, solid, massive. Nothing creaks, dangles, does not move where it should not move (unlike all dozens of my past ips-monics).

Thick quality plastic. It’s a rare moment when you don’t even want to dream about metal.

As I wrote above, I am tired of monitors with flimsy stands, reeling in all directions like the last leaf on an autumn tree. Which bounce on the table when you hit it with a fist. Which can be accidentally moved out of place by the keyboard. And with whom you have to sit on the floor so that your eyes look at the center of the screen horizontally. So I was looking for a heavy monitor with a large surface area and height adjustment.

Well. This stand moves the table by itself. I take the monitor by the leg and swing the table in different directions. The monitor does not move. True, my table is flimsy, but the monitor is very stable – that’s a fact. But hence there is a problem for owners of small tables – the stand is really huge. The extreme points of the tripod are 26.5 cm apart.

The back point of the monitor is exactly at the edge of the table. The leg sticks out 26.5 cm forward (it seems like 26 because of the angle).

Height adjustment is my salvation. How I missed her. The adjustment is smooth, without cutoffs. Fixes securely. For at least a month, my monitor has not gone down a millimeter from its highest position. I hope that it will be so in the future and he will not start sliding down on his own.

The maximum display height is 20 cm.

There is a simple attachment on the back of the leg for minimal cable management. Even one cable fits tightly and holds on tightly, and two even more so.

Monitor control buttons. Not the most convenient (on / off should have been clearly made lower than the others), but, thank God, not sensory. But I have never seen anything more convenient than a Phillips joystick.

HDMI, DIsplayPort and USB port for connecting to a computer with a complete cable.

2 USB ports for connecting the devices themselves.

There are two useless speakers resting there.

With the body sorted out. What’s in the picture?

The surface is matt. I am not a fan. I will never forget some of my IPS Dell with a glossy screen. Constant wow effect when viewing, even when you yourself are reflected as in a mirror because of the sun. It was very similar to the screen of good smartphones. Color saturation was off scale. Then I discovered that not everything matte is cool.

Good color calibration as is, from the factory. Yama’s experience in the production of professional equipment certainly makes itself felt. There was almost nothing to twist in Lutcurve. Better than there is not to do. The monitor initially shows the picture as well as it can. In the end, in fact, I only reduced the amount of green. But I saw an excess of green, in my opinion, on all my monitors, so I suspect that the moment is purely subjective.

The stock of brightness is huge. I have it almost always at 0. From 20 to 40, sometimes I set it only during the day, when the sun is at its zenith and I want to play some storyline single player. Despite the fact that I am sitting on a loggia with huge windows and a lot of light.

Much has been said about hertsovka. Yes, with her it is simply more pleasant to use a computer in principle and it is easier to play active action in particular. It is in games like Overwatch (as opposed to, say, CS) that efficiency really increases. Aimlocks and flick shots become objectively better and easier. It is much easier for the eyes not to lose sight of fast-moving objects and to perceive all the chaos that is happening around.

Backlight bleeding is missing. Black – black, with minimal IPS Glow quality matrix. One of my best monitors for this parameter. I’m going to get high on space movies again.

I didn’t shoot in the dark, sorry. But a bad matrix with hellish highlights would be visible anyway. Here is the usual IPS Glow – a “chip” of IPS matrices.

This is a block of basic settings that I sometimes change according to the situation.

Overdrive has removed the ghosting effect. With overdrive disabled, he was. I checked it as standard, on TestUFO.

MBR. When I entered Overwatch out of old memory, I bet on +3. Feels as if he is adding even a little more hertzovka. Smoothness becomes more, it becomes even easier to follow fast-moving objects, it becomes much easier for the eye to fix on them. Tracers with genjs fly away only on the way. But overdrive is disabled> ghosting appears, so MBR is disabled in day to day use.

Blue Light Reducer is similar to “night light” in Windows 10 and on smartphones. Removes blue, makes the picture warmer.

Black Tuner. Discoloration, or vice versa, enhances the black color. It’s a pity I didn’t have it about 5 years ago, when I spent the night in Rust and increased the brightness in Windows at nightfall, I would try. May be useful in dark pvp games.

Preset presets with monitor settings (like FPS, Sport, Strategy, etc., you can save your own) and sharpness settings.

Settings of the monitor menu itself. It’s very cool that you can set the time after which the menu disappears by itself and turn off the blue LED-LED in the lower right corner of the monitor frame.

Speakers.
I have never met any acceptable built-in monitor speakers, so I did not expect anything good from these. As expected – the bottom. My answer is that I have never heard a worse sound from any source in my entire life. Let me tell you right away – forget that this monitor has speakers. Don’t count on them the same way you don’t count on the scissors inside an inexpensive Swiss knife.

The only negative for me.

In my instance, there is an unpleasant sound like a squeak when the monitor is turned off or in standby mode. At night, when the apartment is quiet, I hear the sound even a few meters from the table, if you listen specifically. Doesn’t affect my overall satisfaction with the monitor.

In the end, I was happy to spend 16k on this monitor. I got everything that was important to me from him: an excellent monolithic height-adjustable stand that firmly holds the monitor on the table; a good ips-matrix with a high-quality picture with natural colors and really minimal illumination for ips-matrices; 165 Hz.

This is a quality, solid product that leaves a thrill out of use. 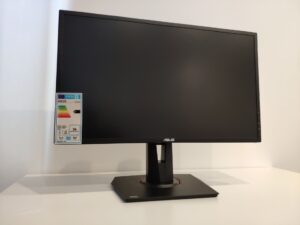 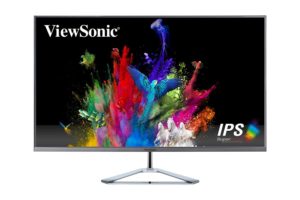 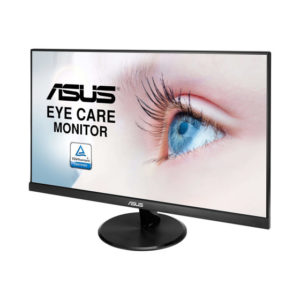