To begin with, the case can really be considered a premium segment case. Made of thick enough metal and glass. Sturdy, but not easy to assemble. Even with instructions included.

The case is strong enough and has an unusual shape. The motherboard is angled. It seems that since it is not closed and it has so many slots, there will be enough bad airflow – this is not so. If you stick your hand inside, the body is well blown out there. All because of the design in the front. Fans on the front side blow air inward and due to the fact that the glass “crawls” out of the case, the air has nowhere to go, except to blow the motherboard.

The box is large. Really. It’s hard to see in the photo, but for me personally it is almost waist-deep. 75x65x26cm, judging by the tape measure. When I was picking up at the point of issue, I thought about what should be ordered with home delivery. It is quite possible to lift it up alone, if the delivery is only to the entrance. (Although I don’t know, maybe they’ll bring it straight into the apartment.) But it’s quite problematic to drag such a box around the city. There are holes-handles on the sides of the box. It is quite possible to hold with both hands.

Opening the box, you can see a kind of “metal constructor”, as at school we were in labor lessons, only it is more difficult, one might say for adults. A lot of details, screws, everything is located quite compactly. There is also an instruction on how to collect it at all.

I collected this joy for 3 hours. Keep in mind that if you have an SVO and you put it on top, then the body bends a little due to the weight. An additional point of support is the glass, which is screwed on the side and does not allow the body to bend.

This is a view during assembly. The body parts are attached to each other using rather heavy and strong rods, with screws on the sides.

To install it inside the motherboard and power supply, I had to put it on its side. Well, how could it be otherwise? By the way, the top cover leans back and in general it can be removed if not needed.

The power supply can be plugged in any size. For this, there are several holes in order to screw the backing that holds it. In my case, there is still enough space left. Ideal for modular power supply. However, it should be borne in mind that due to the non-standard form of the motherboard location, there may not be enough wires to power the CPU and you will have to buy an extension cord. But I fit everything.

The radiator can be placed right under the cover, it fits there quite well. As far as I understand, it is conceived that there will be fans under the cover on top. But I could not put it there, due to the fact that then the tubes do not fit. And the fans are from the bottom, because they work by blowing out of the case.

Here it is completely assembled. HDDs are mounted on the other side. Two pieces fit there. I didn’t take a photo, I was tired by that moment and forgot. Also inside there is a place for 2 ssd 3.5 or one HDD behind the red wall on the side.

Who cares about bulbs and lighting – ideal. Of course, they are not included in the kit, only 3 fans with red illumination. By the way, they do not make noise. My task was to make it so that it would not be necessary to turn on the table lamp and at the same time see what is where on the table. Performs the task perfectly. 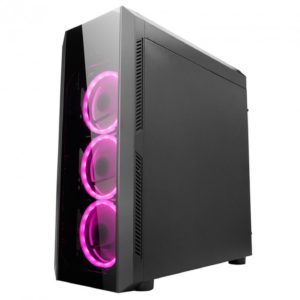 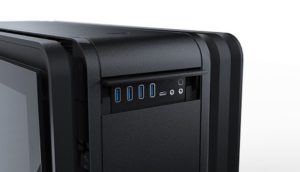 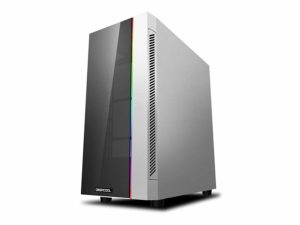